Look at this patient's hands.

· Look at other tendons, particularly the patellar and Achilles tendon.

· Look at the eyes for xanthelasmata and corneal arcus.

This patient has tendon xanthomata (lesion) due to hypercholesterolaemia (aetiology) 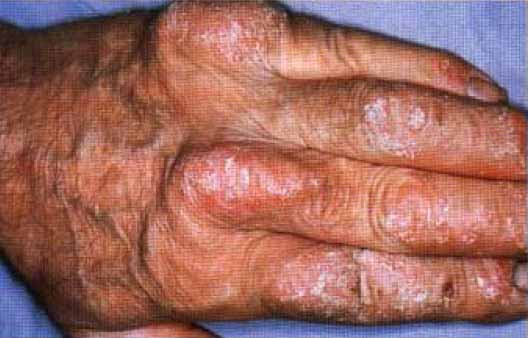 In which condition are these seen?

Familial hypercholesterolaemia , an autosomal dominant trait with an excess of low-density lipoprotein (LDL) or beta-1ipoprotein in the blood. It occurs in 1 in 200-500 of the population.

What is the basic defect?

Goldstein and Brown, in 1975, showed that this condition was due to a defect or deficiency in LDL cell receptors.

At what age do these patients manifest the condition?

Homozygote's usually have xanthomata at birth or as children. They have a pre-disposition to ischemic heart disease, which usually results in death before the age of 30 years. About 50% of heterozygote's also present by the same age .

Xanthomata are tumour-like collections of foamy histiocytes within the dermis. There arefive types of xanthoma:· Eruptive xanthoma (seen in types I, IIb, III, IV, V).

Is there any treatment for familial hypercholesterolemia ?

One view is that in these patients statin treatment should be started when boys are in their late teens and women from their late twenties. If the family history is particularly adverse, however, then there is an increasing tendency for pediatricians to commence treatment (Lancet 2001; 357: 574).Michael S. Brown (b. 1941) and Joseph L. Goldstein (b. 1940), both of the University of Texas Health Science Centre in Dallas, were awarded the 1983 Nobel Prize for their discoveries concerning the regulation of cholesterol metabolism.