Examine the fundus in these patients.

retinopathy. You may have a clue about the underlying diabetes, either from a diabetic

chart or from the presence of diabetic fruit juices at the bedside.

· Gradual or acute loss of vision.

Patient I has background retinopathy (Fig. 74), caused by microvascular leakage into 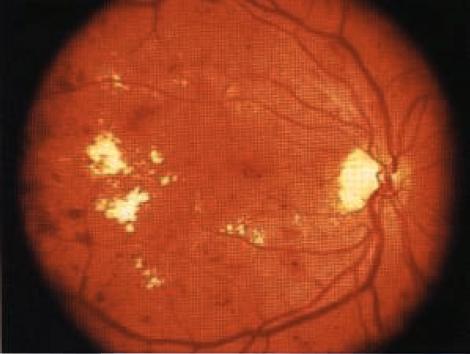 Microaneurysms. usually seen in the posterior pole temporal to the fovea.

This patient has dot and blot haemorrhages and cottonwool spots (lesions), probably

due to diabetic retinopathy (aetiology), and has good visual acuity (lunctional status).

What symptoms will this patient have?

The patient will be asymptomatic as the macula is spared.

How would you manage such a patient?

peripheral (panretinal) argon laser photocoagulation is not indicated for mild to

photocoagulation applied directly to leaking microaneurysms, as well as grid

photo-coagulation applied to diffuse areas of leakage and thickening, is highly

Patient 2 has diabetic maculopathy, caused by oedema and/or hard exudates.

· Signs of background retinopathy with hard exudates or oedema of the macula.

There will be a gradual impairment of central vision, such as difficulty in reading small

What are the signs of macular oedema?

Macular oedema includes any of the following signs:

· Retinal thickening at or within 500 pm of the centre of the macula.

· Retinal thickening of one disc area or larger, in any part of the retina which is

within the one-disc diameter from the centre of the macula.

· Hard exudates at or within 500 [tm of the centre of the macula.

How will you manage this patient?

Non-urgent referral to an ophthalmologist for photocoagulation which will stabilize

(seldom improve) visual acuity in 50% of patients. The ability to alter the course of visual

cautioned that the most likely result of treatment is stabilization, not im-provement, of

What is the principal mechanism of visual loss in non-proliferative retinopathy?

oedema, which results from focal vascular leakage from microaneurysms in the

macular capillaries, as well as diffuse vascular leakage. With time, areas of leakage

What are the different types of clinical presentation ?

Patients may present with no visual symptoms, paracentral scotomata or various

degrees of central visual loss. Consequently, the diagnosis and management of macular

oedema depend crucially on the determination of macular thickening by fundus

The patient is asymptomatic if the macula is spared.

How would you manage this patient?

and treatment of proliferative retinopathy.

stages the vessels are bare and flat and easily missed. In later stages they are elevated

and may be associated with a white fibrous component.

The patient is asymptomatic in the absence of complications.

How would you manage this patient?

Urgent referral to an ophthalmologist for laser treatment.

What are the complications of proliferative retinopathy? 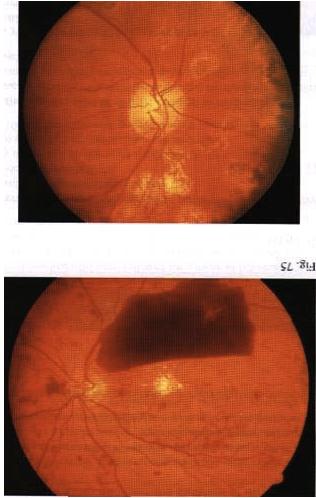 · Rubeotic glaucoma - some of these patients can experience partial restoration of

What is the prevalence of retinopathy in diabetes?

The overall prevalence is about 25%. It is 40% in insulin-dependent diabetes mellitus

What is the relationship between the duration of diabetes and

retinopathy? There is a close relationship: in patients diagnosed as having diabetes

before the age of 30 years, the incidence of retinopathy is about 50% after 10 years and

90% after 30 years. It is unusual for retinopathy to develop within 5 years of onset of

diabetes; however, 5% of patients with NIDDM have background retinopathy at

What is the relationship between diabetic control and retinopathy?

baseline who were followed for a mean of 6.5 years. Intensive treat-ment has profound

the development of new retinopathy and the risk of pro-gression of existing retinopathy.

How often would you screen diabetic patients for retinopathy?

- Newly diagnosed: no screening for the first 5 years.

Over 10 years after initial diagnosis: every 6 months.

What is the earliest sign of retinal change in diabetes?

An increase in capillary permeability, evidenced by the leakage of dye into the vitreous

humour after fluorescein injection, is the earliest sign of retinal change in diabetes

What do you know about the pathogenesis of retinal new vessel

formation ? It is not completely understood and current theories emphasize the

production of angiogenic factors by areas of ischaemic and hypoxic retina. More

hypoxia: it has been implicated in the neovascularization seen in diabetic retino-pathy

What do you know about photocoagulation?

severe visual loss. The laser is used to ablate a portion of the retina and does not

directly cauterize the neovascularization. It is believed that the regression of

retina with reduction in angiogenic factors. Photocoagulation decreases the incidence of

haemorrhage or scarring in proliferative retinopathy.

Photocoagulation is also useful in the treatment of microaneurysms, haemor-rhages and

oedema. Some loss of peripheral vision may be inevitable with this technique.

detachment, glaucoma, infection, cataracts and loss of the eye.