Look at this patient's chest.

This patient has telangiectasia and a unilateral mastectomy (lesion), indicating that shehas had radiotherapy (aetiology) for breast cancer in the past.

· India ink marks over the chest .

* Localized erythema in the same region. 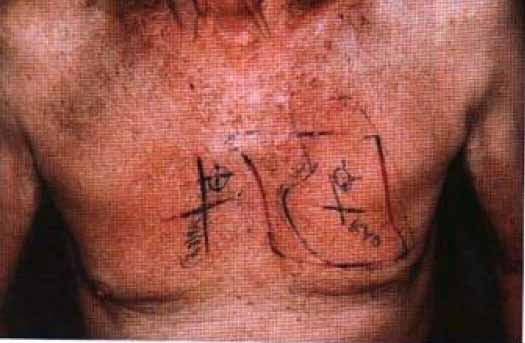 This patient has India ink marks over the chest with localized erythema (lesion) indicating that she is currently undergoing radiotherapy treatment (aetiology).

Which other normal tissues, apart from the skin, are affected by radiation therapy?

Tissues that exhibit early or late damage from radiation therapy include mucosa, spinal cord, bone marrow and lymphoid system. To minimize these effects, radiation is normally delivered in a tYactionated manner to allow recovery of normal host tissues (but not of tumour ).

What modalities may be used to minimize the side-effects of radiation?

How is radiotherapy usually delivered ?

In which conditions is radiotherapy beneficial ?

What are the side-effects of radiotherapy ?

The use of irradiation began shortly after the discovery of X-rays by Roentgen in 1895(Lancet 1997; 349 (suppl II): 1-3).Allen Lichter is radiation oncologist and Dean of the University of Michigan School of Medicine (Lichter AS, Lawrence TS 1995 Recent advances in radiation oncology. NEngl J Med 332: 371-7). He was recently nominated by the Institute of Medicine ,National Academy of Sciences, USA, for his contributions which include three-dimensional treatment planning and conformal radiotherapy of cancers.