Look at this patient's face.

Reddish blue or violaceous plaques on the nose, cheeks, ears and fingers ,with telangiectasia over and around the plaques.

Tell the examiner that you would like to do radiography for hilar adenopathy. 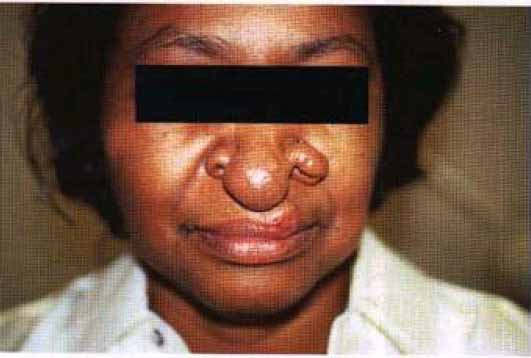 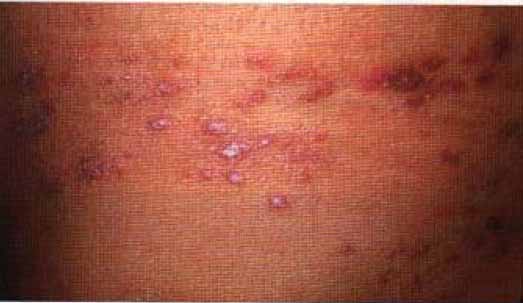 This patient has violaceous plaques on his face (lesion) due to sarcoidosis (aetiology) which are cosmetically disfiguring (functional status). (James DG & Jones Williams W1984 Sarcoidosis and other Graulomatous Disorders. Philadelphia: WB Saunders.)

What is the differential diagnosis of such a lesion?

What are the cutaneous manifestations of sarcoid ?

How may sarcoid present ?

How would you investigate such a patient ?

Bronchoalveolar lavage (usually characterized by an increase in lymphocytes and a high CD4:CD8 ratio).

What is the prognosis and treatment of sarcoidosis ?

What is the treatment of cutaneous sarcoid ?

What are the specific indications for systemic steroids in sarcoidosis?

What are the ocular manifestations of sarcoidosis ?

What is Lofgren's syndrome ?

Erythema nodosum, hilar adenopathy and poly-arthralgias in a patient with sarcoidosis.

What is the source of the raised angiotensin-converting enzyme level in sarcoidosis ?

What is Blau's syndrome ?

It is a multi-system granulomatous disorder of the skin, eyes and joints that resembles childhood sarcoidosis. It was described by Edward Blau, a Wisconsin paediatrician (Lancet 1999; 354: 1035).

Is there any relationship between viral infections and sarcoid ?