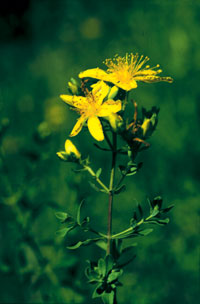 Saint John's Wort is an outstanding herbal remedy steeped in many folk legends and traditions of
healing.

The Greek name for this plant is Hypericum (also its Latin botanical name), which means "over a spirit." It was so named because it was believed to provide special protection, particularly during the summer months, when there is a tendency to feel overly expanded and adversely affected by heat and light. Later, it was associated with St. John the Baptist, regarded as a great solar adept within the Essene tradition, and whose feast day is commemorated at high summer. Despite the great spiritual
power of St. John the Baptist, he pointed to the Christ as the very source of the Sun.

St John's wort is widely known as a herbal treatment for depression. In some countries, such as Germany, it is commonly prescribed for mild depression, especially in children, adolescents, and where cost is a concern


Some believe that hyperforin is the major constituent responsible for antidepressant activity, and it has been shown to inhibit the uptake of 5-HT, dopamine, and noradrenaline. Hyperforin also has affinity for GABA and glutamate receptors. On the other hand, a hyperforin-free extract of St John's wort may still have significant antidepressive effects


When analyzed bio-chemically, the St. John's Wort is found to contain significant amounts of hypericin, a photosensitizing substance that reacts with the light to cause skin burns in light-skinned persons.